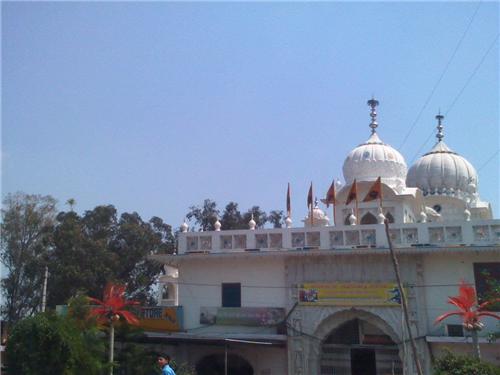 A land of royals, princes, and religious past and untold stories, Patiala is a delight for the historically inclined tourist. There is a whole treasure of history and religion that can be explored in and around Patiala. These have various mythological and religious stories attached to them. Old and ancient towns that are known for their religious importance can be found aplenty just a few kms from the city of Patiala. These places have been a seat of various saints, kings, and religious figures that add charm and intrigue for the visitors who visit these places. Four of t most important historical towns near Patiala city are Banur, Sanaur, Ghuram (also known as Khuram) and Samana.

Banur is historical town in the district of Patiala that is very near to Chandigarh. It is just 25 kms from Chandigarh on the Chandigarh-Patiala Highway. The town is situated on the Sukhna River which is a tributary of River Ghaggar.

Banur has rich history attached to it. The story behind the name of the town is also very interesting. It was previously called Pushpawati and the name was given because of the plenty of flowers found in town in older times. It is believed that the town had large numbers of flowering plants hence the name Pushpawati. Later, the name was changed to Banur in reverence to the local deity, Mai Banno. Mai Banno was a famous and great musician and was a contemporary of the Great Tansen. It is also believed that perhaps she was better than Tansen.

Places of Interest in Banur

Banur provides one an opportunity to indulge in visiting the old temples and other religious icons. The town has ruins of ancient mosque and there is a famous tomb in the town too.

Banur has a great sprinkling of temples in its mohallas. The temples reflect the religious leanings of the time and these temples also portray the religious heritage of Banur. Some of the temples in Banur are Mai Banno Temple, Basanti Devi Temple, Radha Krishna Temple and Gugga Mari.

Every year religious fairs are held in these temples where devotees turn up in huge numbers and offer prayers and enjoy the satisfaction of connecting with the almighty. Gugga Mari is the temple where a three day fair is organized on Navami of Shravan month. Another fair is organized at the Sheetla Mata Mandir where parents turn up with their children as it is believed that the blessings of Sheetla Mata keep the children away from diseases.

Banur is also home to a famous Gurudwara. The Gurudwara occupies a large area and it was built in the memory of Bhai Banda Singh Bahadur. It is near the bus stand on the Chandigarh-Patiala highway. Another Gurudwara is situated near the old police station in Banur.

Another famous tourist attraction in Banur is the Mahendra Chaudhary Zoological Park.

Banur has a definite charm and history that draws people to this place. One can visit it for the sheer pleasure of connecting with history.