One of the famous Gurudwaras of Punjab is the Gurudwara Dukh Nivaran in Patiala. Situated in Patiala city, the Gurudwara has great tradition attached to it. The place where the Gurudwara is situated previously used to be called Lehal Village. 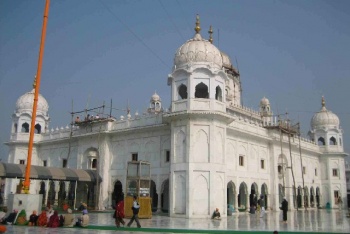 History and Genesis of the name of the Gurudwara

As the name of the Gurudwara goes as Dukh Nivaran, which when converted to English means eradication of miseries and sufferings. There is a great folklore attached to the genesis of the name of the Gurudwara and the history of this holy place. It is popularly remembered that the village of Lehal was under the grip of a mysterious disease at one point of time. So, Bhag Ram, a jhivar of the village, sought  the blessings of Guru Tegh Bahadur and requested him to visit the distressed village so that they could be delivered from the disease with the blessings of the Guru. Guru Tegh Bahadur, on the jhivar’s insistence visited the village and stayed under a Banyan tree near a pond. Miraculously, the village got free of the widespread disease and thus people were delivered from their sufferings.

In the 18th century, Raja Amar Singh built a garden on the site of the Banyan tree as a memorial. As time passed, in 1920 a railway line was proposed at the site that would have disturbed the Banyan tree under which Guru Tegh Bahadur sat.But the faith of the people did not let this happen and the site was left untouched.

It was under the rule of Maharaja Bhipinder Singh and Maharaja Yadavindra Singh that the work for the Gurudwara was started and subsequently carried forward. The Gurudwara was completed in the year 1942 and since then it has passed under various administrative controls. On completion it was under Patla State Government, then it was transferred to Dharam Arth Board and lately it is under the administrative control of Shiromani Gurudwara Prabandhak Committee.

The complex of the Gurudwara is huge and is spread on acres of land. There is a yellow-blue notice board that has the detailed history of the Gurudwara. The gateway and entrance is grand and has white marble. The huge iron gate is a sight to behold. One can also find a small shrine along the passage that leads to the main building. This marble shrine is the spot where Guru Tegh Bahadur sat on his visit to Lehal.  The main building is a double storey structure and is dome shaped on top.  The interior of the Gurudwara is equally splendid and beautiful. The white and grey marble slabs provide a certain beauty and simplicity to the platform.

Sarovar in the Gurudwara 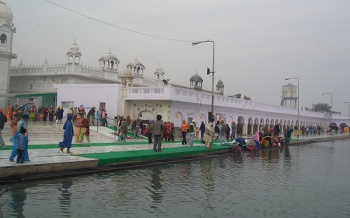 There is a pond (Sarovar) just opposite the main building of the Gurudwara. The water of the sarovar is holy and is believed to have healing power. As written in the Hukumnama, there was a small pond at the site of the Sarovar, which was dug following the orders of Guru Tegh Bahadur to overcome the menace of the widespread disease in Lehal. It is believed that the villagers were healed after drinking the water from the pond.

A very historic religious place with great belief and powers attached to it, Gurudwara Dukh Nivaran Sahib is a very important religious place in Patiala. The popularity of the Gurudwara can be gauged with the number of devotees who visit this place, especially during Basant Panchami. Onit te can feel the calmness and serenity that can lift your spirits if you visit this Gurudwara.