If one goes back down the memory lane, one is reminded of the unique and historical Monorail in Patiala that was initiated by the British. The Patiala State Monorail Trainways was unique and had the distinction of being the only working locomotive hauled railway system on the globe that was built using the Ewing System. One of only two monorails using the Ewing system (the other one was the Kundala Valley Railway) the Patiala monorail evokes memories of the past and is a great historic treasure. 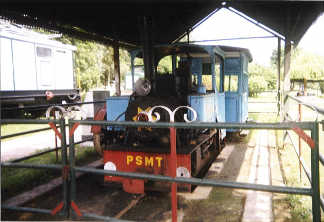 Not a great deal of literature is available for the Patiala State Monorail Tramway. It has just a passing reference in a 1908 publication of the Imperial Gazetteer of India. According to it, the Monorail was inaugurated in February, 1907 and connected Basi with Sirhind Railway Staion. The monorail came into existence due to the efforts of Maharaja Bhupinder Singh of Patiala. It was envisioned to provide a system of efficient transportation for goods and people in the state. The monorail was initially drawn by bullocks and mules, but in later stage steam engine was used for the functioning of the rail. It is believed that the total distance covered by PSMT was 80 kms. 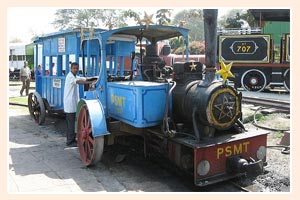 The Sirhind - Morinda Line of PSMT

The Patiala State Monorail Tramway ran on two lines. One of it was the 24 km journey from Sirhind to Morinda. There were plans to extend this line to Ropar, but this idea was done away with as Ropar already had rail connectivity.

The Patiala - Sunam Line of PSMT

The other line connected Patiala to Sunam. This line was 56 km long and was a more comprehensive track than the Sirhind-Morinda Line of PSMT. Though a lot of information is not available regarding the track, it is believed that the track passed through City Mandi , Cantonment and Bhawanigarh and then finally halted at Sunam.

Other Details of PSMT

The PSMT was used for mass transit. It served the dual purpose of carrying passengers as well as cargo. According to rough estimations, at least 20,000 passengers in a month used this unique mode of transport facility. However, the amount of cargo that was transported through the PSMT has not been mentioned.  Finer details of fares on the Sirhand-Morind Line are also available. The fare for passengers in the route was one and a half annas. The charges for transportation of goods was one anna per 80 lb.

The Decline of PSMT in Patiala

Though the Patiala State Monorail Tramways was a unique initiative, it did not continue for a long period of time. Continuous development in infrastructure and automobiles drew people twards cars and other modes of transport and slowly the PSMT became defunct. Finally, the PSMT was close in 1927 as it had lost its popularity amongst the citizens.

The PSMT passed into oblivion at one point of time and not a great deal of effort was put to learn about its whereabouts. But credit goes to Mike Stoew who got t back from the claws of oblivion and the abandoned PSMT was restored. Today, its one of the major attractions in the National Rail Museum and runs on every Sunday for the public. One can enjoy a ride in the historical Monorail by booking tickets in advance for the Sunday rides.

Facts about PSMT in Patiala

The Patiala State Monorail Tramways carries a place of pride in Indian Railway History. One of the most unique railway systems of its time, the PSMT is of great value of interest for everybody